Successful Treatment of Acne Scars in People of Asian Descent

Selecting the Best Treatment for Rosacea

Selecting the Best Treatment for Rosacea People with rosacea...

What You Should Know About Treating Your Eyelids

What You Should Know About Treating Your Eyelids What...

Here’s What to Look for in a Qualified Aesthetic Dermatologist

Here’s What to Look for in a Qualified Aesthetic...

Successful Treatment of Acne Scars in People of Asian Descent

When it comes to treating acne scars, the scaring and pigmentation issues faced by Asian Americans can be as troublesome as the original condition. This is because darkly pigmented skin is more vulnerable to dyspigmentation—an abnormality in the formation or distribution of pigment in the skin.

Non-ablative fractional resurfacing is one of several treatment options for acne scars in people of Asian descent (or anyone, for that matter). During this treatment, a laser delivers heat to targeted areas, while areas of healthy skin are left untreated. The fractional approach allows more rapid healing than if the entire area was treated.

The results of two studies in people of Asian descent show that the number of treatments, the time between treatments, and use of the laser must be skillfully combined to get the best results.

For example, in a study of 27 Korean patients, with moderate-to-severe facial acne scars, the doctors assigned them to received 3 to 5 sessions of treatment, each spaced 3 to 4 weeks apart. The patients compared their results 3 months after the final treatment to photographs taken before treatment. Eight patients (30%) said the results were excellent, 16 patients (59%) described the improvement as significant, while 3 patients (11%) concluded they had moderate improvement. Side effects were limited to short-lived pain, redness, and swelling.

In another study of 47 Asians with facial scaring, where the dose and the number of treatments (8 passes or 4 passes) were assigned based on each patient’s needs, both treatments resulted in significantly improved skin texture and acne scarring. There was also improvement in enlarged pores and overall pigmentation irregularity compared to their initial photos. In this study, the risk of post-inflammatory hyperpigmentation was less among those who received 4 treatments.

Treatments used in both studies were successful and support the role of non-ablative fractional resurfacing as part of a comprehensive treatment of acne scars among people of Asian descent.

Smooth skin and a flawless complexion are highly desired. And the most successful outcomes result from treating the initial concern (facial acne scaring), as well as minimizing changes in pigmentation as shown in the photos. Achieving this balance is where consultation with an aesthetic professional is indispensable. This is because many treatment options, including non-ablative fractional resurfacing, are available. 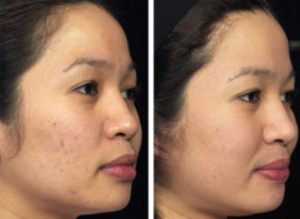 Photos are courtesy of Solta—pretreatment (left) and post-treatment (right).

Learn more about treating acne and other scars. For a consultation and more information about our approach to correcting acne scars with Fraxel Restore, our non-ablative fractional laser system, contact Aesthetic Dermatology and Skin Cancer: Jeffrey H. Binstock, M.D. Drs. Binstock and Physician Assistant Cullinane will answer your questions. Call our office in Mill Valley 415 383 5475.

Jeffrey H. Binstock, MD is a Fellow of:

Are you sure you want to leave the site?